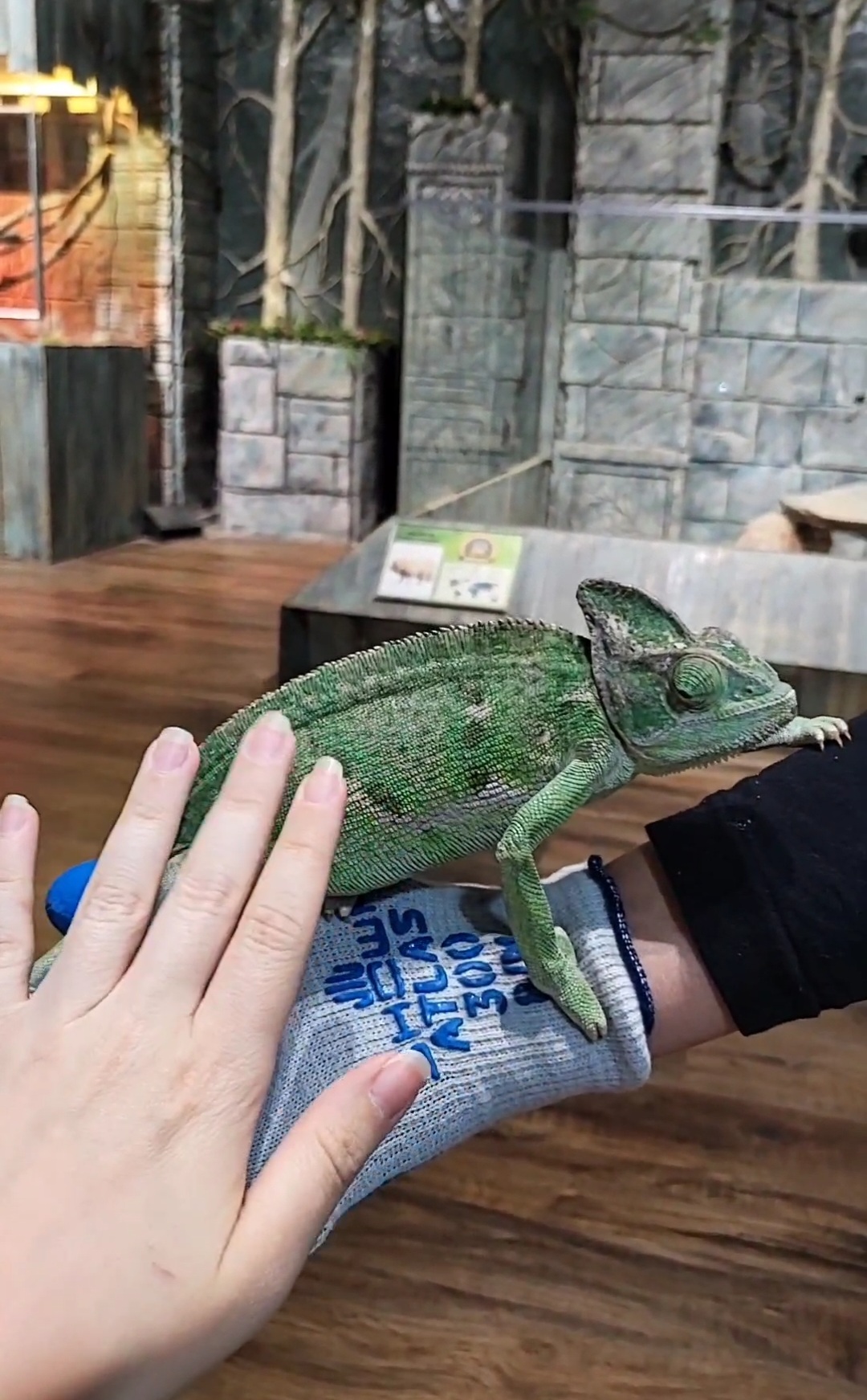 I recently took my daughter, Mayoosha, to another trip to Aquamarine Exotic Farm in Kuwait. Since opening, they moved beyond just being an aqua-scaping / aquarium supplies shop to introducing interactive activities such as Koi fish-feeding as well as an exotic animal corner called “Aqua Kids”.

During our first visit, we visited the section through which you could get up close with the animals alongside a tour guide. Some of the animals were hedgehogs, starfish, and lizards to name a few. For a fee, the tour guide takes you around with some trivia and an opportunity to hold or pet the animals. It’s a really fun experience and the first of it’s kind in Kuwait as I am not aware of any place that allows one to get in close range to various wild animals this way.

Months later in May, we visited Aquamarine Exotic again and the animal section was closed off for a birthday party. Apparently, they now offer kids birthday packages too.

I approached one of the guys working there to inquire about the animal section, to which he said that there’s now an entirely new building right next door that houses them. Named Safari Adventure, the newly constructed premises had already been open for a few months. We got really excited, so my daughter and I hurried over there to get our tickets.

*Tickets start from 5KD, but reduce to 2-2.5KD for children 2 years and below as well as nannies*

After getting our tickets at the booth, we were asked to wait in the lounge area inside. The waiting area itself has a cotton candy vending machine too…

After a few minutes, we entered Safari Adventure. The tour is divided into Rainforest, Desert and Aqua animals.

Upon arrival we were greeted by a crow bird perched on the gate. It was free-flying around the place and the tour guide asked me if I wanted him to sit on my shoulder to which I agreed. I fell in love with crows even more after this encounter and they are officially my second favourite birds now after owls.

Crows or ravens tend to be perceived as these sinister creatures in horror movies and nuisances but as you probably know there is growing research that prove they’re intelligent and even possesses humanlike problem-solving skills. Crows are also very social and warm up to humans. The crow we met at Aquamarine Exotic was super cuddly and friendly, almost exhibiting a kind of personality to him.

The first area we were introduced to was the Rainforest section and the meerkats– also known as “Timon” from the Lion King. I always assumed they’d be somewhat friendly but they’re actually one of the animals we weren’t allowed to approach. Coming from South Africa, they are approachable up to 6 months of age after which they turn into aggressive “pitbulls” and perceive any visitors as intruders. At the time, they were all bundled up together taking their nap which looked deceivingly cute.

Next were the Lemurs of Madagascar. There were about six of them in a glass enclosure, energetically leaping and prancing around. The tour guide told us it would be okay to enter the cage and give these monkeys a snack, but warned us that prolonged presence will intimidate them. I passed this invitation and opted not to enter. The guide told us they were vaccinated against rabies, however they ARE known to have very sharp teeth and bite. It seemed that most of the animals there were friendly and trained to be comfortable with humans but you never know with their unpredictable nature. Overall, I felt safe.

My daughter was afraid to approach most of the animals with the exception of the guinea pigs to which she said “because they’re soft!” And she’s right! Mayoosha enjoyed petting them.

We also saw the White Racoon Dogs, an animal I’ve never heard of before. At the time, they were tightly curled up and sleeping so we didn’t get a good look at them.

The chameleon lizard was also amongst my favourite. We were allowed to gently pet it’s scaly body, but it wasn’t safe to hold due to having sharp claws. As I placed my hand on it, I saw it’s 360 vision camera lens-like eyes moving towards me fingers.

We also held some snails! Super slimy by cute nevertheless.

The desert owl was also another cute small-sized camouflaged creature of the desert that we saw. It looked tiny and skinny due to it’s ‘concealment posture’, usually activated when the owl feels shy or afraid. The tour guide told us it was safe to pet it gently on the head only.

Other creatures included the iguana as well as other species of lizards.

To get to the Aqua section, we passed through a large cage with small parrots flying everywhere. We had purchased a cup of food for them at the booth when getting tickets so this was the time we could enter and feed them.

The tour guide told me that the birds will be coming at me once they saw the food in my hand which kind of freaked me out. They were sitting all over me at that point and the tour guide made my anxiety worse by telling me that I had to keep the food steady otherwise they could get angry. I told her I wanted to get out as the flapping of wings all over me started to make me uncomfortable (my daughter was also watching mommy get ‘attacked’ and pecked by birds lol and was clearly worried). To anyone with ornithophobia (legitimate fear of birds, I wouldn’t recommend this!).

We also passed through the Aqua section with clownfish, starfish and other small marine fish before leaving. We took one final visit to the crow to say goodbye!

Since this was a spontaneous visit, I didn’t have my professional camera with me as I would had taken more photos. Even if I did, that first time experience was everything and we were too busy being captivated by the animals and learning about them.

Overall, it was lots of fun and something unique to do in Kuwait. We will definitely give this place another visit after a couple of months, especially once my daughter turns three this year and will enjoy the experience all over again!