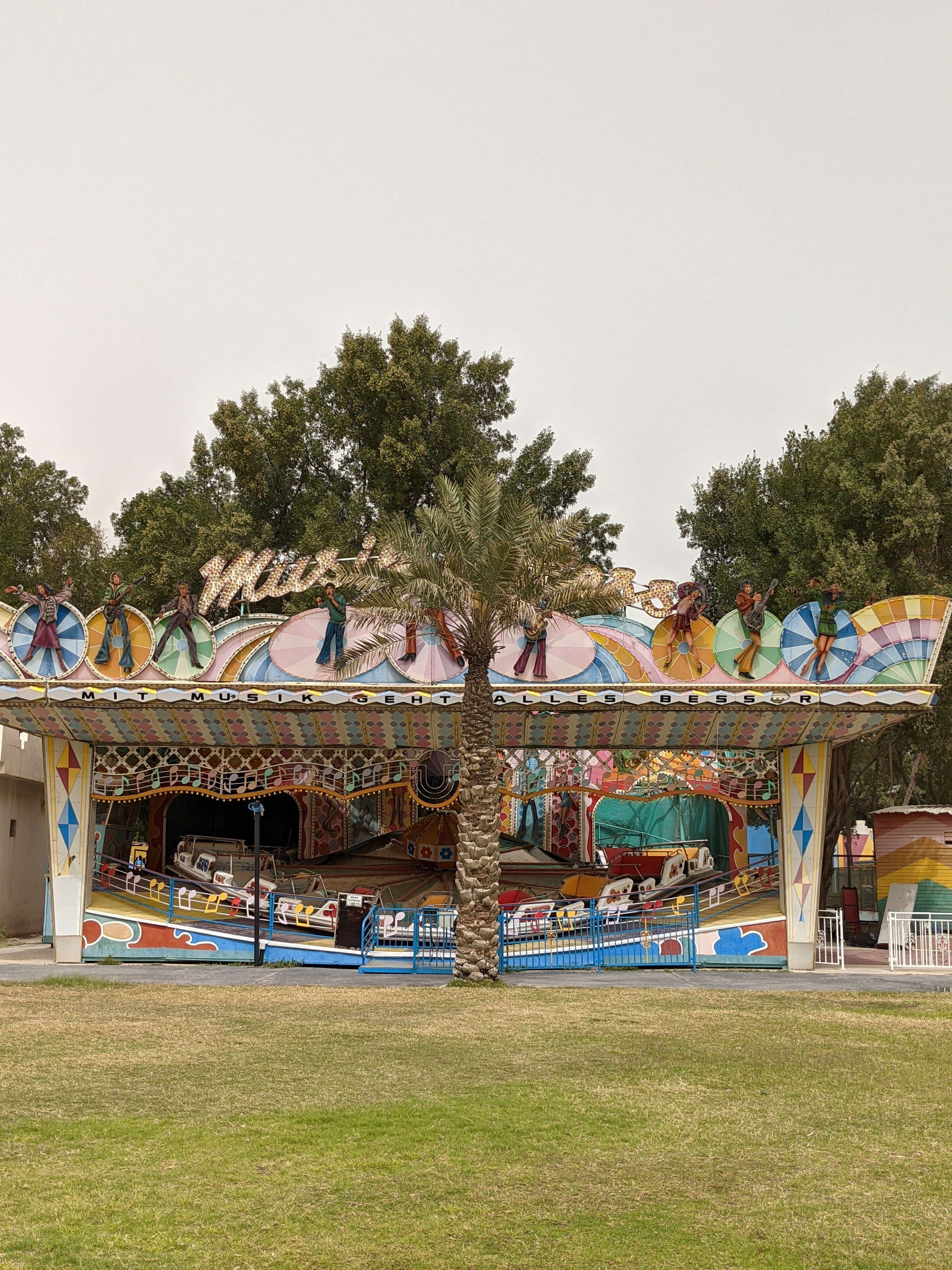 With each passing day of our current partial lockdown here in Kuwait, I think about how underprivileged we are in terms of geography (the hot weather). But despite this, I try to make the best of what we have – during winter times that is. When the scorching sun quickly creeps back in, I can’t help but wonder what is left to do in this country. I love going to malls, dining and so on but eventually you want a change.

Even during winter, people just migrate to outdoor seatings of restaurants and coffee shops. Heck, now that restaurants have closed people are just dining inside their car. Me on the other hand, I’m trying to take advantage of the weather with my little daughter and being in the outdoors on parks and beaches.

What Happened at the Kuwait Magic Mall?

I was visiting Kuwait Magic Mall the other day with my daughter because I remember they had quite a nice seaside area there. The shores were inaccessible from inside the mall (due to COVID-19), so we walked all the way to the backside of the building to reach it.

It’s been ages since I last visited the mall, probably since school. From inside, the mall looks outdated in a 90’s kind of way. Most shops are old-fashioned and the best part – the arcade upstairs- has been closed for over a year now after the pandemic hit. A few live popcorn stations and cheap toy booths are still operating.

So as we walked across the long stretch of beach with fishermen lined up on the coast, we found an easy entryway to the amusement park which was obviously closed down too since the pandemic. Most of the old-time rides were draped with giant blue coverings while the exposed ones were rusty.

At the time, there were workers cleaning the place with large spraying devices. I walked into the amusement park with caution and nobody seemed to mind me stepping inside, although I am positive it wasn’t allowed. But what harm could it do?

My daughter and I wandered in with our nanny and we had fun pointing out the large-scale zoo animal replicas standing tall amidst the place. We also spotted a carousel and some other funny carnival-themed rides. It kind of took me back to Kuwait’s now demolished Entertainment City- a vacant retro amusement park. I was taken back to a time when we used to frequent this theme park at Kuwait Magic as a family before any of the other malls existed in Kuwait. The mall is kind of forgotten now.

This was one of the most eye-catching rides for me. I love the 70’s character designs in the background! Can you imagine having the entire (working) amusement park to yourself? That has always been a fantasy of mine!

I was curious to look up this specific ride and some interesting information turned up. This ride was manufactured by HUSS Maschinenfabrik of Bremen, Germany from 1982 to 2000. It’s a ride that moves around in a clock motion – either clockwise or counter clock-wise in an orbit-like manner. The surprise factor is that it stops in midair and then meant to reverse to any position without warning.

So there you have it, our mini adventure to a closed off amusement park. It was a brief peek since the experience was like a “see and run” kind of situation hehe. I can now (kind of) check off one of my bucket list things to do, which basically was to visit an abandoned amusement park. Except this one is still operating.

This got me thinking…why is Kuwait choosing to forget the nostalgic places?

I wanted to dedicate this post to one of the last amusement parks we have left here in Kuwait (in addition to Hawalli Park). Kuwait’s 80’s Entertainment City was completely demolished in 2020. Shaab Park, another popular amusement park, has ceased operating in 2017 is approaching the same impending doom (yes, it’s still standing there in desolation). The only them park still operating is the Kuwait Magic Theme Park. I understand that the former parks will be renovated and replaced with more modern ones, but it’s sad and feels wistful knowing that the old places are quickly fading. We’ve been seeing it a lot with constructions in Kuwait – they were worn out, haven’t been taken care of for ages and of course they were outdated, kitschy and trapped in time. For that very reason, the country wants to make way for more progressive and modern infrastructure that can accomodate things like “an indoor snow park” or another massive aquarium.

However, those places were Kuwait’s treasures too because we felt affection for them throughout our lives here. I wondered why they couldn’t have been preserved instead or atleast mixed nostalgia with renewal to pay homage to the old place. Otherwise, the complete destruction of it left a kind of void in the community. Removing such places is ridding us of all our time and joy spent in them. I have old photographs of my family and I in Entertainment City in the 90’s. We would frequent the park ever so often just like everyone else remembers it. This very place has fallen into disrepair and now POOF! suddenly gone. It was more than just an entertainment place. It was something Kuwait could call it her own, rather than just another global franchise.

Even with so many malls around now, Entertainment City would have still been a favorite because spending time there would evoke happy memories and a shared love for these places with family and friends. As time goes by, these memories turn to nostalgia as we reminisce it’s iconic attractions like The City of Sinbad and Ali Baba.

After the park ceased its operations, people lamented over the sad news from across the country. Let’s admit it, most forgot about the place. It’s a good case of “you don’t appreciate something until you lose it”.

Old amusement parks remind us of a simpler time, afterall.

What about our children?

Honestly, ever since our last main amusement park was demolished it got me thinking about the lack of places left for children to go to in Kuwait. Kids need to experience the fun that’s synonymous with a classic childhood – the outdoors – like theme parks, carnivals, farms, zoos, museums, botanical gardens, travel, field trips and more. The type of places where you hear childrens’ laughters and screams. Our zoos in Kuwait deserve a massive upgrade (and yes the hot weather doesn’t help) and a new theme park is in the distant future. We need better and more parks, gorgeous blooming gardens, exciting boat trips, a fun water park (which by the way, was demolished too!)

We need to prioritize our kids.

If the only places kids can go to nowadays are shopping malls, that’s a pretty sad reality. Who really needs a “baby spa?”, an indoor snow park? or an arcade room? Kids require active and thrilling entertainment. Something they will remember forever.