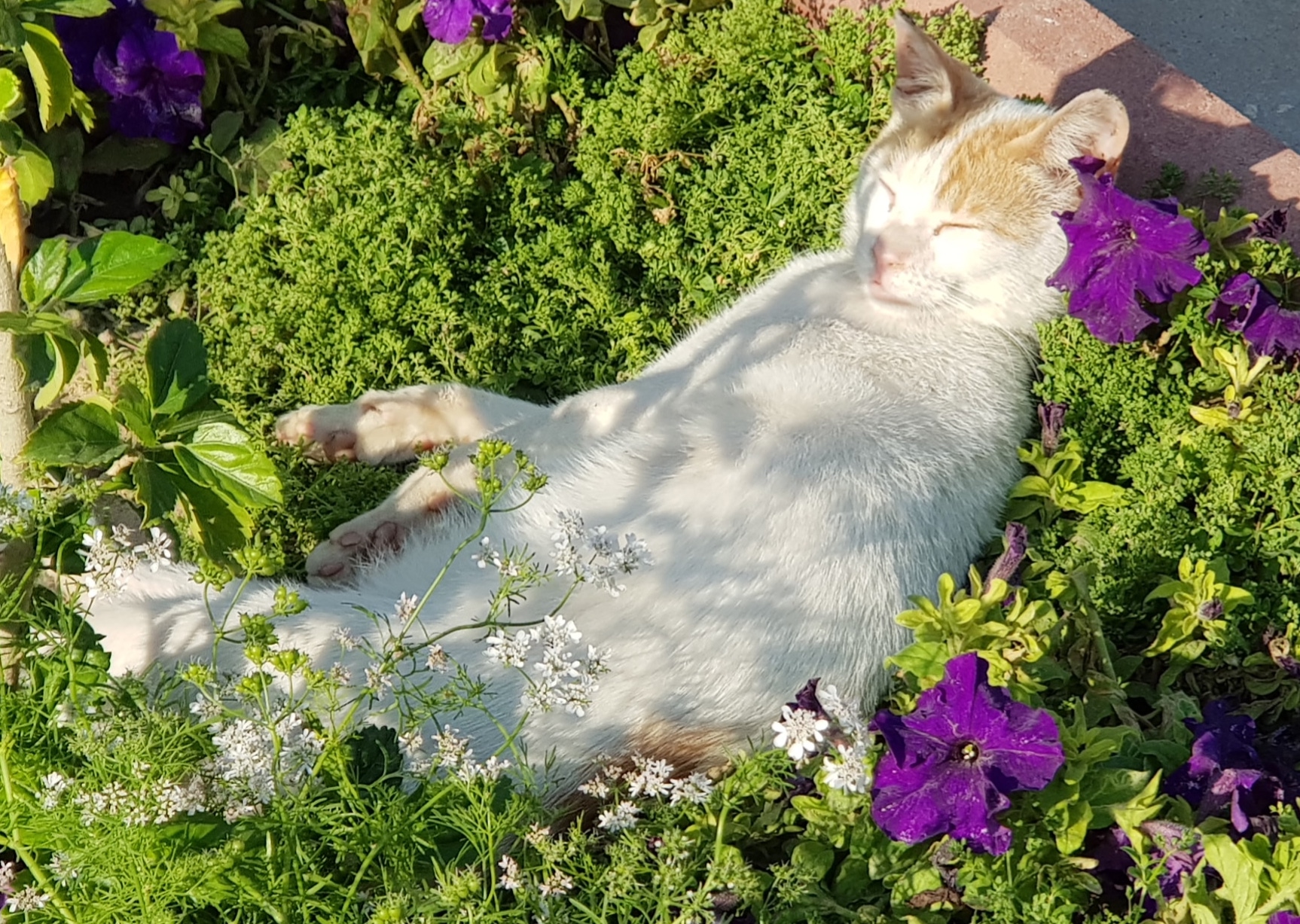 It was a summer afternoon when I drove to our house to water our indoor plants. My parents were vacationing at the time. As I enter our backyard there’s a frightened and timid kitten, about 7-8 months old, with white fur and an orange-tinged head and tail. Whenever spotted, she would scurry towards a corner, occasionally peeking out at the stranger with curiosity. Her hiding place was a dark outdoor staircase leading to our basement.

Mila was cautious, yet at the same time, seemingly desperate for somebody to feed her. I could tell she wanted to be approached and feel safe, but with the unknown harsh streets out there she kept her guard. She was super dehydrated, starved, and miserable from months of scavenging trash and fending for herself. Keep in mind, this was last year in July at the height of summer in Kuwait.

I immediately entered our house and fetched a can of tuna, the readily available go-to snack for pretty much every street cat out there!

I stepped outside with a plastic bowl of tuna and water in the other, and walked to her hiding spot. I approached Mila slowly, speaking softly to reassure her I’m safe to be around. At that exact moment, she surrendered to her hopeless condition. I was no longer a stranger, no longer a threat. Perhaps Mila didn’t care anymore, and just wanted to be fed and cared for. Before the bowls even touched the ground, her skinny and boney neck reached out headfirst to feed. At this point, Mila’s desperate hunger and cry for help was greater than her fears.

This continued daily for a few months ahead. I eventually became a friendly stranger that she waited for in the exact spot at the same time. She was no longer afraid and I won her confidence.

Time passed and suddenly Mila disappeared and we didn’t know anything about her whereabouts. I just assumed that she mustered up the energy she needed and wandered off to face a new path, as with most cats that mature and leave.

But little did I know, that this was not the last time we would be seeing Mila.

Mila making her second appearance, all grown up!

Months later, on the morning of our outing, we spotted a familiar face in our neighborhood. It was indeed Mila, now a young adult, back from her temporary fling! She instantly recognized us too, and perhaps even remembered the place where she was nurtured and rescued. Around that time it was already the onset of winter, and the ruthless searing weather was not around anymore (thank goodness!). She noticed us from afar, stared for a few minutes, and came sprinting at our direction.

From that day on she became our close neighbor and our loyal companion, visiting us every day from morning to nighttime, taking naps in her little nook, and enjoying our company.

Stretching after a nap 😴

Whenever we stepped out of the house, we were welcomed by her, and upon returning she would follow us and obediently sit at the foot of the door and wait to be petted, sometimes asking to be caressed with a broken sweeping brush that lay in our backyard.

Mila looking through the door as she waits

My father would feed her meals such as fresh fish, yoghurt, some cold cuts, bread and cat snacks. Recently he got her a collar, a better cat house to rest behind our backyard, and even grooms her. He instantly became her best friend (let’s just say she was well-pampered lol).

Mila waiting for my dad, as she relaxes on his car 😊 .

Mila is very patient, quiet, and compliant for a street cat. She has a unique personality of her own that we love! In return, she shows her affection and appreciation too.

Mila playing with the kids

Mila takes comfort in hanging out with us on BBQ nights 🍖

Most recent photo of Mila, taken in April 2019.

So far, Mila is doing well!

Treatment towards Animal Welfare in Kuwait

Through-out the years, I’ve witnessed lots of stories surrounding the street cats in our neighborhood. Cats and her kittens stuck inside a drain pipe that had to be rescued, orphaned kittens left abandoned on the sidewalk, domesticated cats left astray, and many more incidents. But Mila, was one of those cats that stuck around. To some people, such cases are a trivial matter because they perceive them as pests that continuously breed and populate the streets.

But, Mila’s story made me think about the overall cruelty towards animals in Kuwait which unfortunately still runs rampant. I still see and read about children and teenagers who have violent tendencies towards animals, and I can’t help but wonder why this happens and what goes on through their sick minds. Why do they feel the need to torture and kill an animal that 1) Doesn’t harm them in any way, 2) Is trusting towards humans and 3) Can’t defend themselves because they’re helpless. It’s just all-in-all inhumane, no matter how you look at it.

Animals are constantly faced with the perils of the outdoors because of people like this, who can’t just let them be and they derive some kind of sick fun from animal abuse. Doesn’t our community teach kids to care for them? What goes on in raising these young adults to make them think this is acceptable behavior? Don’t they know about the prophet’s love for felines if you’re so religious and obey god? I believe this only predisposes them to other acts of violence in the future, because this kind of behavior is certainly not normal.

In Kuwait, we aren’t being tough enough towards animal cruelty. Yes, there are shelters (which aren’t supported as much nor taken seriously) and pet businesses are booming with pet cafes and grooming salons. However, that doesn’t erase the fact that animal cruelty still exists.

How many “social media stories” have appeared on platforms, claiming that a local mistreated an animal and the authorities just looked away? Yes, they might charge or fine and even arrest animal abusers when they’re called out by a concerned community of animal lovers, but how far does this ‘punishment’ go and does it teach others anything?

There’s a law to protect pets only, but even owners can be irresponsible (why would you keep a Chow Chow dog in Kuwait when you know the summer is merciless?) A lot of pet owners deem an animal as an accessory more than anything else, instead of a creature with feelings just like any living being on this planet. They’re either neglected, exploited or preyed upon.

Many might argue, that there’s nothing that can be done to reduce the uncontrollable increase of stray cats. The cat outburst that happened in Kuwait a few years ago, lead the government to implement a poisoning campaign. But, in other places around the world, such as Turkey, there’s a community network of cat-caring. It’s not purely idyllic, as animal abuse exists everywhere unfortunately, however, in countries like Italy as well, street cats are well-groomed and well-fed.

In some cities in Germany, street cats should be neutered or spayed by law to control their population. That’s why you probably don’t see as many. They’re also caught and taken to a shelter or housed.

Sometimes, if you go for a walk at Kuwait’s Scientific Center on the seaside where there’s a big population of street cats, you will find cans of food placed for them by strangers. There’s even a small self-made shelter for cats that’s overseen by a caretaker. The cats there are generally cleaner and healthier due to this. A few efforts are indeed done in Kuwait, but increasing punishments for anyone found guilty of intentionally causing harm or distress to animals is still missing.

It starts with reporting more of these cases, teaching children to be kind towards animals, volunteering to help them even if you find one in your backyard that seeks care, and supporting legislation that encourages kindness towards animals.

Until then, there will be cats like Mila in search for compassion.