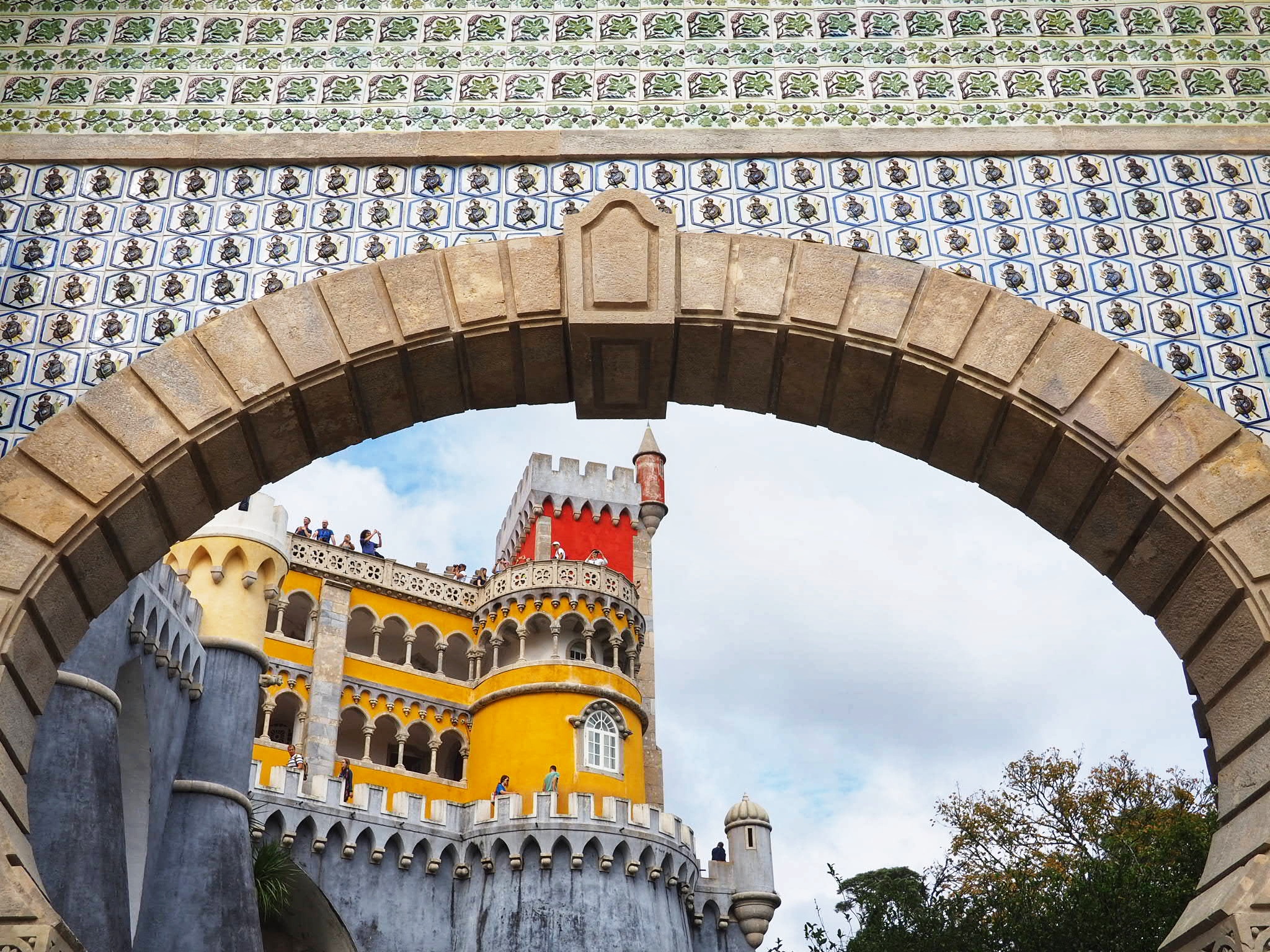 Royal summer places, fairytale castles, and gardens made for romance. This is Sintra, Portugal. Mostly unheard of by travelers.

During our stay in Lisbon, we decided to take a day trip to the compelling town of Sintra.

In the majesty of this Shakespearean-like town, we were surrounded with romantic Portuguese architecture while making our way through ruins quilted in moss. The air of history and mystery echoed around us. Moreover, what makes it’s history fascinating is that it was purely a retreat for Portuguese royalty in the past!

Nestled on top of Sintra Hills is the extravagant Palacio De Pena (Pena Palace). We had our fair share of ascending Portugal’s steep hills, so this time we decided to board a bus to take us to the hill on which one of Sintra’s dreamlike castles is perched.

I have sort of an obsession with castles. Maybe it has to do with being a symbol of the Middle Ages, a period of history for which I have a deep fascination. Perhaps it’s the romantic and fairy-tale aspect and because castles are replete with ancient legends. Their somewhat grimly silent walls carry a past filled with stories of adventure, tragedy, and romance.

Since 1995, the Pena Palace was placed under UNESCO World Heritage Site protection for it’s cultural and historical significance. The location dates back to the Middle Ages when a chapel was built to a local religious figure called Lady of Pena. Therefore the place represented mainly a religious site at the time.

Kings after kings built their own constructions on top of the area, including a monastery, which was then severely damaged and brought to ruins by the 1755 earthquake. The monastery was then transformed into Pena Palace and finally completed in 1854 by King Ferdinand II for his Queen Maria II as a romantic retreat. Many kings and queens that followed visited the palace as a summer getaway.

On the outskirts of the palace, is something called a Wall Walk. It is from this path that one can enjoy the breathtaking  landscapes of Sintra and the countryside from all sides, and this is where I felt like a queen of my own castle!

Views of the Moorish Castle from the Wall Walk

The National Palace of Sintra

Not to be confused with Pena Palace, the National Palace of Sintra is another royal residence recognized by it’s two white towering chimneys (Yes, actual chimneys!). Inside, the structure and decor is of Moorish roots. Because of it’s expansive history, the interior of the palace had undergone several renovations inspired by Moorish and Gothic influences.

Rooms dating back to the 1500’s range from the Arab Room, a personal bedchamber where the king slept, dining room, the Court of Arms room (holding the coats of arms of 74 Portuguese noble families with 18th-century tiled walls), a beautiful courtyard, and one of my favorites is the Grotto of the Baths, tiled with mythological ceramic art and scenes of nobility. We could even spot tiny opening (holes) in the walls of the tiles from which water jets criss-crossed the bath.

The Grotto of Baths

The Court of Arms Room

Window view from one of the rooms, looking on to a garden

This was personally my favorite royal residence of them all, because we entered the scene of a mystical fairytale set in Lord of the Rings or the likes of Romeo and Juliet. With hidden passages, spiral towers, and paths guarded by waterfalls and ambiguous statues, the property is actually an estate that was formerly owned by millionaire Antonio Augusto.

Some exotic flora surrounding the property

The gardens of the palace are vast, and one could easily get lost amidst it’s secret corridors and network of tunnels. I can imagine being entirely alone with my husband there and just playing hide and seek all day long in it’s bewildering and tricky forested park. There was this one small tower in the garden that was directly from a scene in Romeo and Juliet, from where I stood looking down at my husband..We were at the heart of a romantic Shakespearean play.

One of the main highlights of the palace is a mysterious Initiatic Well with a depth of some 28 meters. We were lead to the tunnel from below and climbed up the twisting stairs to reach the top of it.  Strangely enough, the well wasn’t used as a water source but rather, for secret ceremonies and rituals. It was more like an underground tower.

Even though our trip to Sintra was short, we thoroughly enjoyed the colorful palaces, extravagant mansions, and exotic gardens and overall mythical grounds of this beautiful town!